When I was reading my scriptures one morning last week, this verse stood out to me…

“But, behold, my Beloved Son, which was my beloved and chosen from the beginning, said unto me – Father, thy will be done, and the glory be thine forever.” (Moses 4:2)

I know that there are multiple scripture verses that talk about his concept of giving the glory to God. In fact, we offend God when we don’t confess His hand in all things.

“And in nothing doth man offend God, or against none is his wrath kindled, save those who confess not his hand in all things, and obey not his commandments.” (D&C 59:21)

And even though I believe in the truthfulness of this, I feel like it is a common internal battle to understand why I am supposed to give all of the glory to God. God isn’t physically here on the earth, so it’s my hands that are physically doing the work, but yet the glory belongs to Him.  And I’ll admit that I have sometimes had a hard time knowing why and how to give all of the glory to God when I feel like I “deserve” (pridefully) some ownership and credit as well.  I’m sure I’m not the only one that struggles with these thoughts sometimes.

But what I am realizing is that when I recognize that I am just the instrument, then I can wholeheartedly give the glory to God.  And there is still some room for recognizing my part – the part that I played as the instrument.  My mindset changes from “Look at what I created!  I’m so cool/smart/talented/etc.” to “God is amazing.  He gave me what I needed and I did His will.  I played my part to help bring to pass God’s purposes. (and even that confidence and courage that I have and used came from God.)”

I was thinking about what an instrument is.  Here are a few of the definitions: 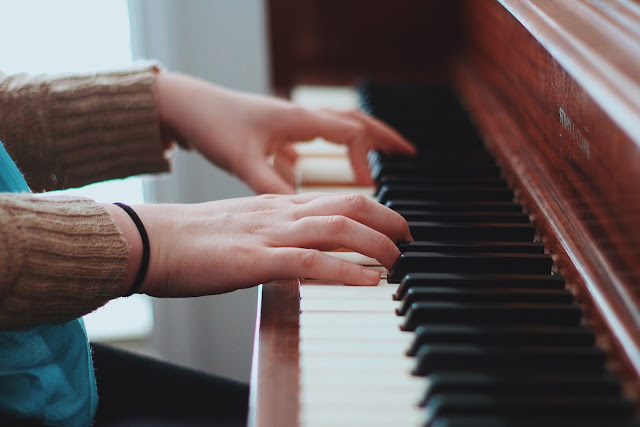 Photo by Elijah Henderson on Unsplash

Let’s look at the first definition for a minute – a device used to produce music (musical instrument). At first glance, it may look like the sound is coming from the instrument, but it isn’t. The instrument on its own cannot make music (except for those self-playing pianos. But can we even call that a true instrument? For me at least, the music may sound pretty, but when I come around the corner and see that it isn’t being played by a real person, it loses value and beauty).

Now let’s look at the second and third definitions – a means whereby something is achieved, performed, or furthered; one used by another as a means or aid.

God puts ideas, insights, and inspirations into me and then I am the instrument that organizes the matter, creates something with it, and then can share it out for others to benefit from. The original message isn’t from me though. We don’t believe in ex nihilo creation – creation “out of nothing”. The matter comes from God.

I was thinking about how Jesus Christ created the heavens and the earth.  The creation was under the direction of Heavenly Father. Christ did the work, but He gave the glory to Heavenly Father. Again, we don’t believe in creation “out of nothing”.  Jesus Christ didn’t create the heavens and the earth from nothing. He took matter that already existed and organized it into worlds.  Christ was not the source.  He was the instrument.  And because of this, He gave the glory to the Father. I find it interesting that the words inspiration and insight start with the word in.  To me, that implies that something is coming in.  And if something is coming in then it doesn’t come from us – it comes from outside of us.  If we break up the word inspire, we get in and spir(e).  Spir or Spiro is latin and defined as “to breathe”.  So if we add the prefix, in, inspiration means “to breathe in”.  We can’t breathe in (physically, spiritually, mentally) something that doesn’t already exist.  It has to exist outside of ourselves in order for us to breathe it in.  Meaning, we are not the source.

I also read that insight means “inner sight, mental vision, and wisdom.”  To me it implies looking inward and seeing something that was already there. It doesn’t come from you. It’s not new. You just now have the eyes and light to be able to see it more clearly than before.

“For behold, this is my work and my glory—to bring to pass the immortality and eternal life of man.” (Moses 1:39)

And throughout this entire process, He commands me to confess His hand in all things and to give the glory to Him.  Because I can’t create something from nothing.